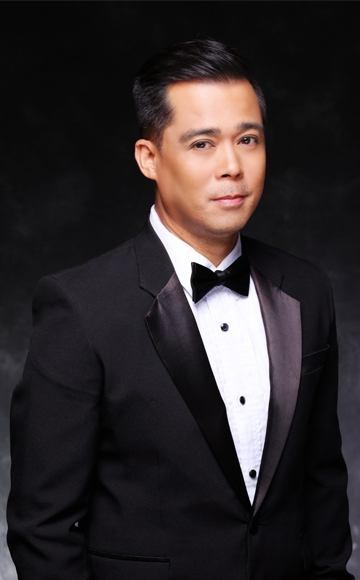 "Kilabot ng mga Kolehiyala”... “The Original Prince of Pinoy Pop” - Some of the titles given to multi-platinum recording artist/ songwriter/ concert director and total entertainer Dingdong Avanzado. Over – all, he is regarded as one of the most exciting live concert performers to watch in Philippine music over the last two decades.

Dingdong burst into the limelight in 1987. Having a “Boy Next Door” image, he immediately gained a huge following with the high school and college girls performing in different campuses all over Metro Manila. Soon after, a singing “heartthrob” was born and his hit songs “Ikaw Lamang” and “Tatlong Beinte Singko” became instant favorites in the airwaves.

Not long after, he became a household name. He succeeded in delivering hit songs after hit songs such as “Maghihintay Sa’yo, “Makapiling Ka Sana”, “Basta’t Kasama Kita”, ”Bakit Labis Kitang Mahal”, “Wish I Could”, ”To Love Again” and “Walang Kapalit” which all became love anthems in Philippine music.

Aside from receiving several gold and platinum record awards, Dingdong received recognition for his live performances and also for his songwriting. He bagged the Aliw award for Most Promising Entertainer of the Year in 1988. He then went on to receive an Awit award for his song “Paalam Na” that garnered the Song of the Year award and Best Ballad Recording in 1996. This cemented Dingdong’s place in Philippine music.

In 2006, Dingdong and his wife, the Phenomenal Diva, Jessa Zaragoza set a new record for being the very first married couple to release an all duet OPM album called “Laging Ikaw,” under Universal Records.

Aside from being the brilliant entertainer that he is, Dingdong is also an OPM visionary, actively pushing for advocacies that will benefit the Philippine music industry. Currently, he sits as one of the Board Members of the 'Organisasyon ng mga Pilipinong Mang- aawit (OPM) and is concurrently the organization’s corporate secretary.

He was inducted into the Philippine showbiz industry’s Walk of Fame in 2009, a project which he helped conceptualize and implement when he served as Quezon City Councilor.

In 2012, he released his newest all original compositions album entitled “Download” and on November 2012 staged his 25th Anniversary Concert held at the Music Museum.

In 2013, he garnered a nomination at the 4th PMPC Star Awards for music as Best Male Pop Artist of the Year for his album Download (25th Anniversary Songbook) under Viva Records, and Male Concert Performer of the Year for his concert 3.25 – Tatlong Beinte Singko.

Now, almost three decades after, he still continues to perform and excite Filipino audiences throughout the globe not only performing his numerous “hits” but also showcasing the best that Filipino entertainment has to offer.